Day 2 of our build: another overcast sky but, thankfully, no rain. And we got even more done than we had hoped for. Here’s the story in pictures:

The upper part of the west face is lowered into place

Hammering the wall into the exact position

The wall is braced while we add the next wall

The storage racks are starting to empty out

The long upper north wall is dropped in 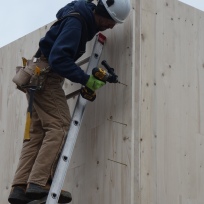 The walls are screwed together 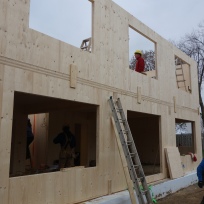 The large window openings on the south face

Inside the second level: bathroom, without inside walls

Inside the second level: the view east from a bedroom

The second level ceiling goes on

From a distance, the house seems much smaller

We had hoped to have enough time to get the gable ends up, and we did 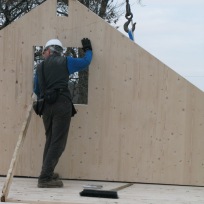 The gable ends are fixed into place

But even better, we had just enough daylight left to get the ridge beam in too 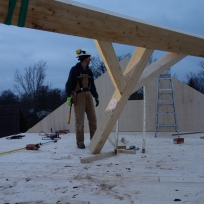 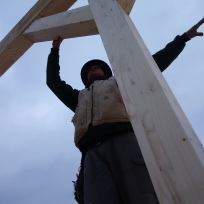 The beam is lowered into position…

…and hammered into place

Beautiful! But that’s all we had time for today.

So, we got far more done than we had been anticipating, even hoping for. This means that tomorrow, we will only have to do the roof panels, which will save a significant amount of money on overtime for the crane and operator at least. But more importantly, we will have managed to do what fully trained crews in Germany and Austria do in just about the same time. Part of the reason we did so well was the great crew, all of whom were amazing, but as he is leaving us tonight and won’t be back tomorrow, I particularly want to thank Ian, the incredible timber-framer, who volunteered his time to help us out just because he want to learn about CLT building. His knowledge, skill and strength have all been essential.

This site uses Akismet to reduce spam. Learn how your comment data is processed.